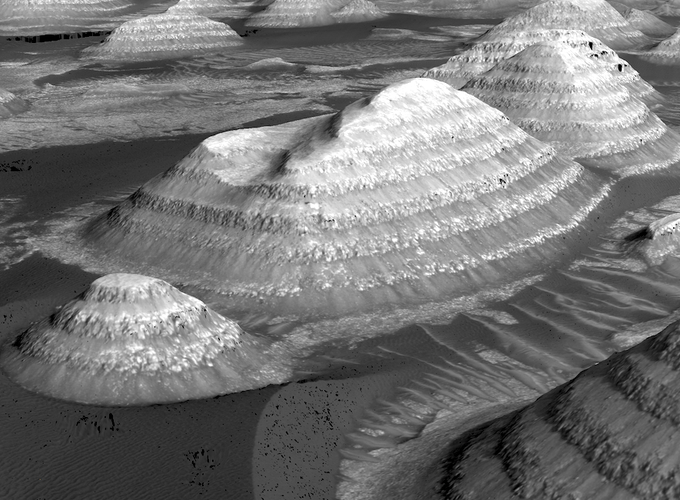 I started my Ph.D. at Johns Hopkins University in the fall of 2016. This page will expand to a few paragraphs to explain my research project so please stay tuned for updates. Given the amount of work I’ve done, it will take me a while to update this page so below I’ll just preview the section titles to hint at what will eventually be here. Until then please read my recent JGR Planets Paper (link is in my publications page). 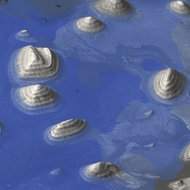 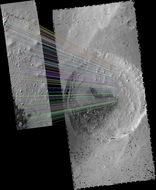 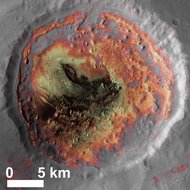 Layered deposits have been found across the surface of Mars since we started taking high-resolution satellite images of the surface. Layered rocks are essential to planetary scientists because the layers can preserve a record of the climate that describes the history of the planet. The presence of layered rocks alone tells us that some re-occurring process produced the different layers, and these processes can involve liquid water. Knowing the precise details about the activity of liquid water on Mars are one of the scientific community’s biggest unanswered questions. By investigating layered rocks, in a variety of locations and interpreting their geologic record, we can piece together the larger story of water on Mars.

Geography on Mars is a bit different from the Earth due to the lack of plate tectonics and oceans. A broad region near the equator and prime meridian called Arabia Terra contains many old impact craters containing layered deposits within their interiors. If you have read the book or seen the movie The Martian by Andy Weir, Arabia Terra is the region the character Mark Watney drives across (no spoilers). These layered deposits, in particular, are interesting because they may have formed by lakes or playas within the craters fed by groundwater. I also officially named a few of these craters with The Gazetteer of Planetary Nomenclature through my first paper.

On the Earth, layered rocks are formed by the deposition of sediment to form sedimentary rocks. As these layers accumulate, they each say something about the environment in which they were created, and in particular, the time they were formed. Layered rocks serve as a literal record of geologic events, much like tree rings record a tree’s history. These rock records describe the history of the planet they were formed on. This principle underpins geology and is how we have learned the geologic history of the Earth. In particular, understanding how the layers were formed is critical to know what the record is telling you. So if we can figure out how these layered deposits were formed, we can figure out what the climate of Mars was like when they were created and how it may have changed through space and time.

To study these layered rocks, I need to get close. Unfortunately, the rovers on Mars are busy elsewhere. Instead of looking at these rocks from the surface (in-situ being the term), I use satellite images from a camera called HiRISE (High Resolution Imaging Science Experiment). HiRISE is onboard the Mars Reconnnasaince Orbiter spacecraft and images the surface at about a quarter meter per pixel resolution. This resolution is comparable or better than what is commercially available on the Earth, at least until fairly recently. Thanks to this high resolution, I can clearly see these layered deposits in Arabia Terra. Although to properly study these deposits, a single picture is not enough to answer how the layered deposits were formed.

However, suppose I can get two carefully planned images as a stereo pair. In that case, I can make a digital elevation model (DEM) of the surface. This process is called stereophotogrammetry or computer stereo vision. It can produce an elevation dataset at a similar high resolution to the images used. However, HiRISE images are large, and stereo processing can take lots of time and manual effort. To solve this problem, I used open-source software provided by NASA called the Ames Stereo Pipeline (ASP). ASP automates much of the tedious work required to make a DEM. Through my Ph.D. I have developed a toolset that further automates ASP to make HiRISE DEMs called ASAP (Ames Stereo Automated Pipeline). I describe ASAP in a separate section of my site, and it is hosted on my GitHub. In the end, I can produce high-quality DEMs of the layered deposits in a reproducible manner.

Elevation data is critical for studying these layered deposits as it is a massive information dimensionality increase from a single image. A lot of geology is possible from a single image. However, quantitative answers to questions about layer thickness and directionality (orientation) are tough without elevation data. From the elevation data, we can visualize and measure the geometry of the layered deposits. We can determine how these layered deposits were formed from this geometry information by comparing the geometry with deposits studied on the Earth. We also gain a record of each layer’s geometry and can see how these layers changed through time. The changing properties through time describe how each layer’s formation varied and can, in turn, tell us how climate conditions on Mars changed.